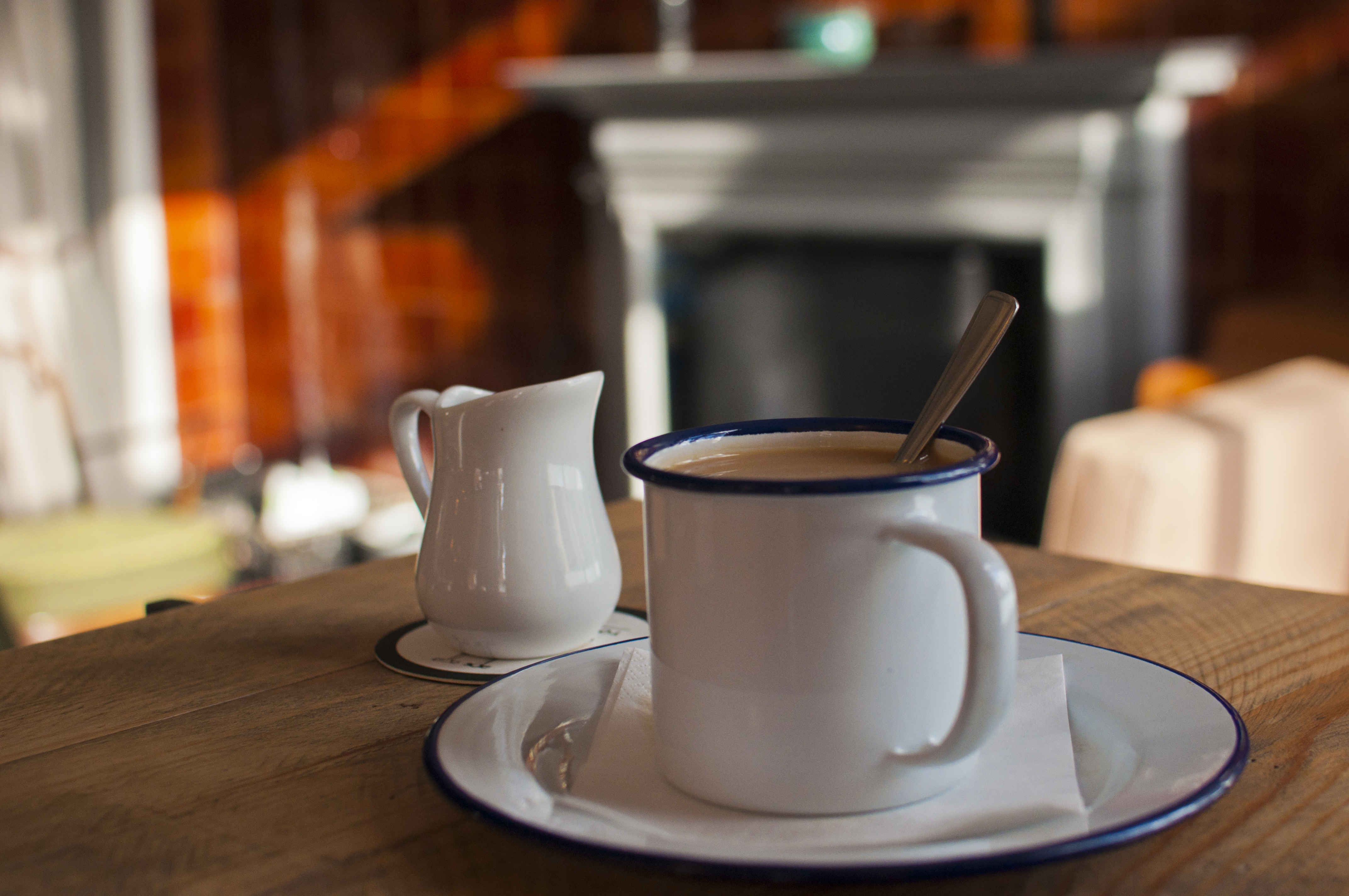 Subject: A nice cup of tea

Location: The Blacksmith and Toffeemaker, Islington

Time has shown George Orwell to be an elusive man. Despite his time at the BBC, there is no record of his voice. Nor was he ever caught on film. We just have a few old photographs to look back upon, and even these can be counted on the fingers of two hands.

None of these photographs are of particular quality – is worth remembering the ‘30s and ‘40s were the age of Cecil Beaton, Robert Capa and Henri Cartier Bresson, so quality was possible – but they do strongly convey a sense of Orwell the writer in later life.

One famous example is a black and white of him sat at his typewriter with a cigarette hanging from his mouth. Taken after the war it shows his health in steep decline. His body is thin and hollow. His eyes are sunk and his face – overexposed, bleached of colour – is almost a horror to behold. It’s sort of a paradox picture. For all his physical frailties he appears metally alert locked in concentration – his creative and analytical powers as strong as ever. He would soon write 1984.

Another photograph, presumably taken later the same day, has him gazing out of a window, relaxing by his desk with a cup of tea. And thinking about it now I realise that – although the pictures are not well exposed, lit or processed – the photographer has otherwise done his job rather well. He’s caught Eric with a cigarette (at work) and a cup of tea (at rest). They depict him in his natural habitat – a room lined with books, a lone typewriter on an empty table. His hair is ludicrous as ever, he’s in a shabby suit, there’s a handkerchief rumpled in the breast pocket. These were Orwell’s objects and this was Orwell’s place.

And so to tea. This is the first of these photographs that isn’t inspired by a monthly association in his Why Bad Climates Are Best essay. Orwell could not think of a good association for either January or February so simply left them blank. To fill the gaps I decided to pick several images from other essays published in relevant months – and here I’m starting with A Nice Cup of Tea – a celebrated piece from January 1946.

Like Dr Johnson long before him – “with tea amuses the evening, with tea solaces the midnight, and with tea welcomes the evening” – Orwell enjoyed tea. And over the years he devised a recipe for the perfect cup that he revealed to readers of the Evening Standard on 12 January 1946.

I’m going to go through Orwell’s eleven points in turn to assess the quality of my own cup of tea – pictured above –taken in the newly rebranded Blacksmith and Toffeemaker pub near to City University in Islington (or just down the road from where Orwell was brewing away 76 years before).

1. “One should use Indian or Ceylonese (Sri Lankan) tea”

Mine was an English breakfast tea, sourced from Ceylon, so it would have been satisfactory.

2. “It should be made in small quantities”

It was. A tea bag was put into the cup, and the cup was filled with boiling water from one of those steaming coffee machines. It would have been better to have come in a little pot.

3. “The pot should be warmed beforehand”

As explained above, it wasn’t served in a pot.

Reasonably, I don’t see the point in a weak cup. The tea bag stayed in for five minutes.

5. “The tea should be put straight into the pot”

It wasn’t. It came in a teabag – though these were not in high circulation in the 1940s. (The rectangular tea bag was not invented until 1944)

6. “One should take the tea pot to the kettle and not the other way about”

Not precisely. Although the cup was taken to the boiling water – so the theory holds.

7. “After making the tea, one should stir it or better, give the pot a good shake”

I stirred – spoon is visible in the picture.

8. “One should drink out of a breakfast cup – that is the cylindrical type of cup, not the shallow type”

As you can see, it was a cylindrical cup. Although it was a little shallow.

9. “One should pour the cream off the milk before using it for tea”

I didn’t have to bother, as the milk came semi-skimmed. Again, a difference to 1946.

10. “One should pour the tea into the cup first”

11. “It should be drunk without sugar”

So overall, the Blacksmith and Toffeemaker, Islington, scores 8/11 on Orwell’s tea test. Over the next couple of days I’ll catch up with the last of the January pictures – The Best Junk Shop in London.