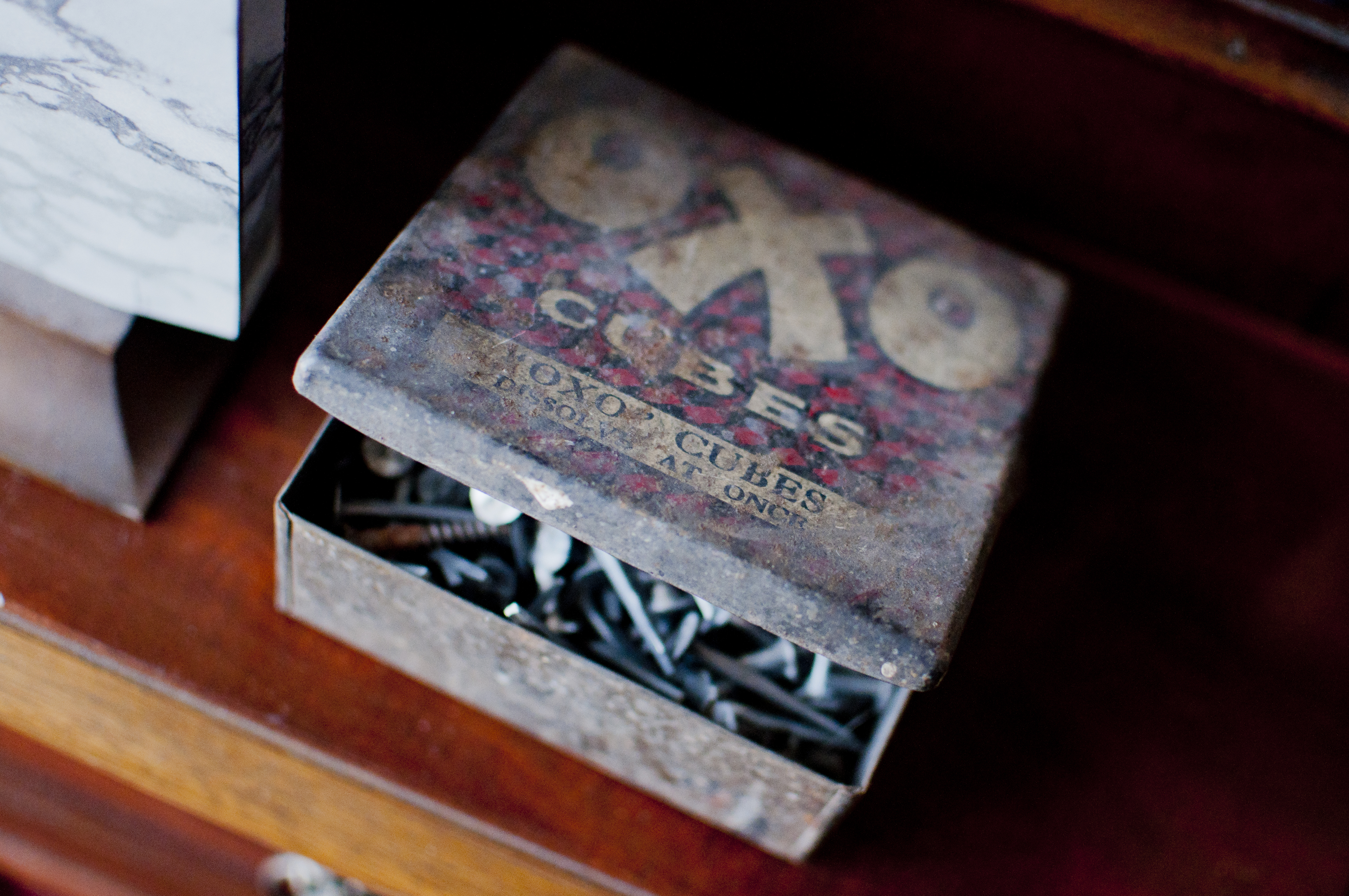 Subject: The Most Attractive Junk Shop in London

It’s taken me far too long to write up number fourteen. A job for the January has lingered in on my to-do list until the end of February. But here, at last, it is.

My task for this one was to take a photograph of the most attractive junk shop in London, a typically Orwellian location. Throughout his writing life Orwell liked to champion the underdog: the tramp on the street, the common toad in the garden (I’ll get to that soon), the decency of the working man in his factory over the rapacious capitalist in his office.

Equally Orwell liked the junk shop, the underdog on the high street. These weren’t the kind of place that a respectable person would like to be found. They were cluttered, badly sorted, unfashionable, unpredictable and wilfully self-depreciating – junk, after all, is hardly the most appealing word in the dictionary.

But these qualities amounted to something of an earthy charm for Orwell. And through his writing he demonstrates how he came to view junk shops like shabby treasure troves, little havens in the shopping streets that existed outside the capitalist bubble.

Junk shops were on his mind at the start of 1946, perhaps due to the enormous shortage of everyday items after the war. On 5 January he wrote a piece called Just Junk – But Who Could Resist It? for the Evening Standard. It would begin a fantastic run of lively journalism over the next few months that included A Nice Cup of Tea and Why Bad Climates Are Best, the piece that inspired this project in the first place.

I wanted to let Orwell talk about junk shops in his own words. So I’ve decided to present the ideas he forwarded in his piece in the form of an imaginary interview.

Let’s say it’s half past seven on a gloomy morning in January and a talented BBC producer has managed to locate Orwell (don’t ask how) for a brief interview with John Humphrys on R4. The subject of the day is junk shops and Orwell is the expert.

JH: Good morning. So what exactly do you think of when I say junk shop?

GO:. A few things immediately. A junk shop has a fine film of dust over the window. It’s stock may include literary anything that is not perishable, and its proprietor, who is usually asleep at the back in a small room, never displays any eagerness to make a sale.

JH: So little bit like an antique shop then?

GO: No, not at all. A junk shop is not to be confused with an antique shop. An antique shop is clean, its goods are attractively set out and priced at about double their value and once inside the shop you are usually bullied into buying something.

JH: I see. So there’s more onus on you in a junk shop – you’ve got to sift to find what you’re after yourself?

GO: That’s right. It’s worth remembering that a junk shop’s finest treasures are never discoverable at first glimpse, they have to be sorted out from among a medley of bamboo cake-stands, Britannia-ware, dish-covers, turnip watches, dog-eared books, ostrich eggs, typewriters of extinct makes, spectacles without lenses, decanters without stoppers, stuffed birds, wire fire guards, bunches of keys, boxes of nuts and bolts, conch shells from the Indian Ocean, boot trees, Chinese ginger jars and pictures of Highland cattle.

JH: Christ, I can’t imagine what you’d want to do with any of that. Do you ever find anything of value in these shops?

GO: Victorian broaches and lockets of agate or other semi-precious stones can be found occasionally. Perhaps five out of six of these things are hideously ugly but there are also very beautiful objects among them too. They might carry some value.

JH: Not sure what I’d need any of those for. Is there anything else – practical stuff, useful stuff?

GO: Well, Papier–mâché snuffboxes with pictures painted on the lid, lustre-ware jugs, nuzzle-loading pistols made round about 1830 and ships in bottles.

JH: No. Not sure I need anything like that. People don’t smoke very much anymore, you know. The government’s all against it.

GO: Well, all these things are curiosities, but one does find useful things in junk shops as well.

JH: Go on, give me one example of something useful. Just one

GO: Okay. In a shop in Kentish Town, since blitzed, I once bought an old French sword bayonet, price sixpence, which did four years’ service as a fire poker. And during the last few years the junk shop has been the only place where you could buy certain carpeting tools – a jack plain for instance – or other such useful objects as corkscrews, clock keys, skates, wine glasses, copper saucepans, and spare pram wheels.

JH: Fair enough. And where could I find one of these junk shops? The only shops I seem to go into nowadays are part of large chains. I’m not sure where to start. Where’s best?

GO: You’ve got to know where to look. I could lead you to some first-rate ones in the dingier areas of Greenwich, in Islington near the Angel, in Holloway, in Paddington, and in the hinterland of the Edgware Road.

JH: Are there any in the real heart of London, near Oxford Street for example?

GO: You’d have to look carefully for them. I’ve never seen a junk shop worth a second glance in what is called a ‘good’ neighbourhood.

JH: Thank you very much for your time, Mr Orwell.

So, off I went at the end of January in search of a junk shop to live up to the description. I asked for some tips on Facebook and got back a variety of suggestions. One friend said that there were some excellent ‘second-hand emporiums’ up in Hornsey and anther told me to go to a tiny store in Hampstead.

But best of all was a link sent by my friend David Goldsmith, recommending a junk shop – actually called The Junk Shop – in Greenwich. Greenwich was a place that Orwell had mentioned himself, so I wondered whether it might be the same one – a survivor that had outlived Woolworths, Jessops and Comet and all the rest of them.

I ventured down on the same sunny January day that I had taken the photograph of the cup of tea. And there, just a few hundred metres from the DLR station, was the most perfect paragon of a junk shop that I could have ever imagined.

The store front was piled with tat. A blue bicycle was propped up on its hind wheel by the door, a picture frame hung at an angle in the window, a sign on the front announced COMPLETE HOUSE CLEAN: SHORTEST NOTICE HIGHEST PRICE to everyone on the street. People were milling in and out.

Inside the attendant was busying herself with a packet of salt and vinegar crisps and paying little attention to the customers. I explained to her that I was on a quest for the most attractive junk shop in London and she told me that I’d come to the right place.

‘The best bit’s at the back, there’s loads of African art’, she said.

I asked her whether she minded me taking photographs – she didn’t – and off I set in an attempt to create a visual record of the myriad junk that hung from shelves, was stuffed in half-shut drawers and stacked in stalagmite-like piles from the floor.

I’ve put a little gallery of the curious objects that I found just here. It’s my nomination for the Most Attractive Junk Shop in London and if you want to read more about it (or perhaps even visit) – then they’ve a website here.

PrevWeather, weather (and paperback on the way)
Historical Miscellany #10 – Nelson at Copenhagen (1801)Next