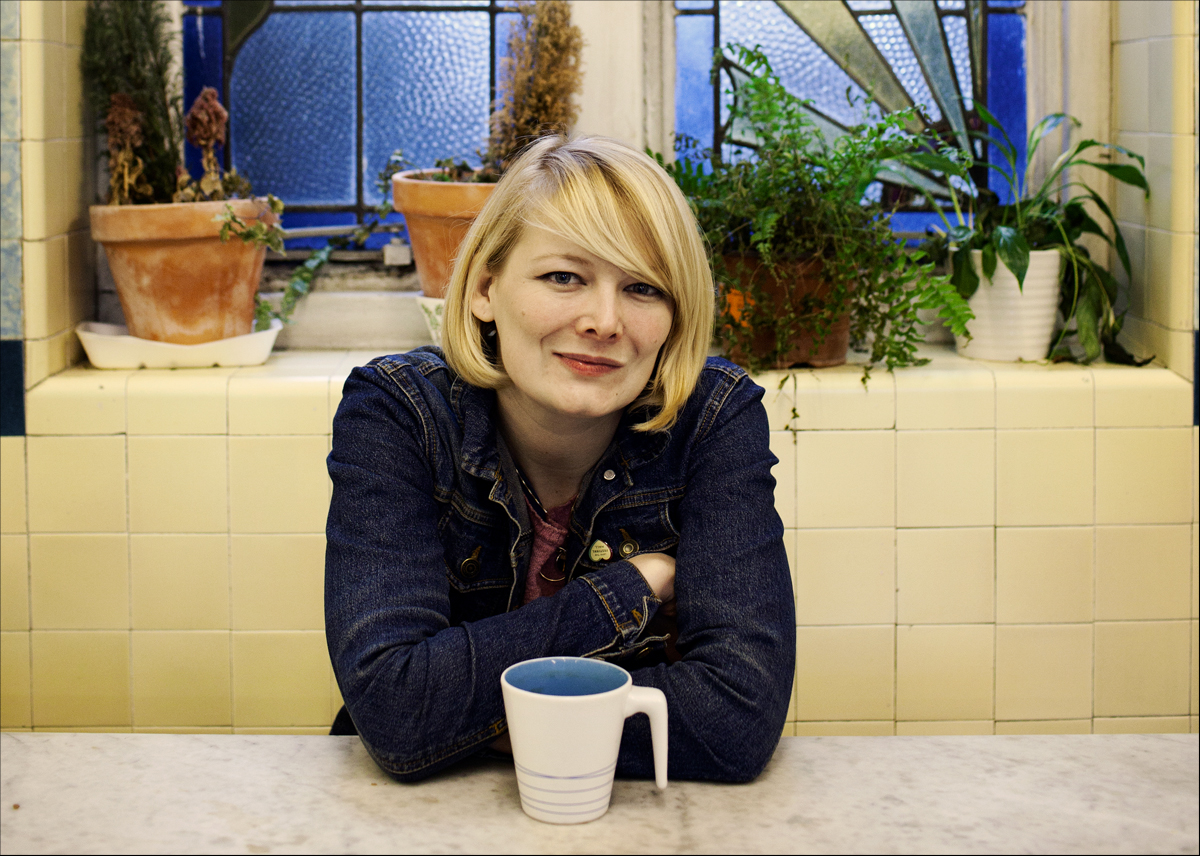 Something a little different on the blog today. A year ago I met Kerry Hudson. We were both paddling in very much the same literary boat. It was about a month till our debuts were released. We had both been signed by the same publisher at pretty much the same time, and we were both nervous about getting mauled, chewed up and repeatedly stamped on by the critics.

It’s been quite bewildering watching what’s happened to Kerry since then. Her magically moving book Tony Hogan Bought Me an Ice Cream Float Before He Stole My Ma came out last July. The Observer dubbed it ‘Joyful’, the FT called it’ full of warmth and bittersweet humour.’ It was shortlisted for the Guardian First Book Award, the South Bank Sky Arts Awards, the Saltire Scottish First Book of the Year and the Green Carnation Prize. At one point she found herself in a three-way shortlist tussle with Will Self and Hillary Mantel.

So what is Tony Hogan about? In essence it’s the story of an irresistible heroine called Janie, a girl full of spirit and courage, who we meet on the day of her birth. The plot follows Janie’s young life, set against a grim backdrop of filthy Scottish council flats, B&Bs, ‘screeching women, feckless men, fags and booze and drugs.’  At times it’s funny at others it’s desperately sad. It’s a book that challenges the way you view society and how the most vulnerable of people are treated.

So, after a year of critical success Kerry’s paperback has just been released and to mark the occasion I thought I’d take the chance to ask her a few questions of my own.

Tony Hogan is a bold book in so many ways. But most strikingly in its voice, which comes from and progresses with Janie as she grows from 0 days to 16 years – narrating as she goes. It made me think of her as a modern day David Copperfield – how difficult was it finding this voice?

I know I should answer that it was a real struggle but the truth is that Janie’s voice came almost fully formed as soon as I started the book – I often liken it to her drumming her little fists on my back when I wasn’t typing fast enough. I was hugely lucky though because this was my first ever novel and I had no real idea what I was doing but having the voice there meant that could lead the narrative.

You’ve also got a fantastic skill for presenting Scottish dialogue. It feels so authentic and you have great fun with it. How easy was it for you to find the rhythms of the language?

Though those who hear me speak in real life wouldn’t believe it, I am a Scot myself. With the dialogue I created a lexicon of words in dialect and then just translated whatever was in my head into my mum or grandma saying it back to me. After it was all finished I read the whole thing aloud (I do this with all my work) to check the rhythm which I feel is really important for my writing to ‘work’.

Why does the Scottish dialect work so well with literature? There’s so many examples – most obviously Irvine Welsh – is it the directness and honesty of it?

I’m sure the directness helps. I always think of it as a bit raw but also musical – it does have its own particular rhythms and it’s often beautifully economic. I once described it as sounding like the sea…I’m not really sure what I precisely meant by that but I want to stand by it.

I recently discovered the literary term Bildungsroman – ‘A novel whose principal subject is the moral, psychological, and intellectual development of a usually youthful main character’ – which sums Tony Hogan up very well. What reaction from readers have you had to Janie’s story?

What a brilliant word – I’m stealing that. The reaction from people has been absolutely overwhelming. I got lots of messages from people from similar backgrounds, from people who said it opened their eyes to a segment of society they’d never been up close to and, most commonly, from people wanting to somehow intervene as they watch the events of the book unfold. I was terrified by the possible reaction to the content before publication so it’s been hugely heartening to see people respond in the way they have to the Ryan women.

Do you find it a bit odd that the book is now referred to (and remembered as) Tony Hogan, when it’s clearly Janie’s story?

I don’t – though sometimes other people get annoyed about it. The thing about Tony Hogan is he is the catalyst for Iris, the mum’s, actions and so for the journey Janie goes on throughout the book. He’s the first domino that topples the rest.

There’s a particularly enjoyable section when Janie’s trying to watch Dogtanian ‘and the three muskehounds’ on the television and she gets frustrated with the drowning voices of adults and responds by turning up the volume (and then a bit more). It’s a great scene. Do you have a favourite moment in the book?

Thank you, I’m guessing you were a Dogtanian too? I’m particularly fond of the last line but there’s also two scenes in the book where Janie, Iris her mum, and her sister Tiny all curl up in bed together and those scenes break my heart each time I read them…they seem so vulnerable but full of love for each other in that moment.

Your writing is very visual. Let’s take one example – ‘I was reading the Dandy in the office for twenty minutes before Ma arrived, panting and explaining about the busses. She wasn’t wearing any make-up and her eyes looked small, her mouth thin, wet hair combed backwards. I could tell she’d rushed’ – have you always been a good observer or is this something you’ve learnt?

I don’t remember learning it but I’ve always been a watcher and I’ve always taken solace in deconstructing everything happening around me so I could understand things better. Like Janie, I grew up in often hostile or adult environments and I think what was once a coping and survival mechanism became my saving grace as a writer.

Tony Hogan is strewn with cultural objects that really remind us of a moment in history: the Brylcreem, Fraggle Rock, Rambo vidoes, packed lunches, the turkey burgers, the Super Noodles. What five objects would you use to sum up Janie’s childhood?

So much of the book is relevant today. Just in the last few months we’ve had an increase in the amount of time it takes to claim jobseekers’ allowance, there’s food banks popping up, a benefit cap and George Osborne has been emphasising the strivers/skivers debate. I’ve read before (somewhere) that Tony Hogan is 80% based on your own experiences. Do you have any feelings about this?

My book is set twenty years ago but, as you say, we’re seeing the same massive problems with child poverty and literacy, pregnancy, obesity, substance abuse and unemployment in marginalised young people. It’s the oldest trick in the book to wait until everyone is feeling the pressures of the economy and then push through heinous policies by creating a ‘blame culture’. It makes me fucking sick.

Occasionally something will make me hopeful though, recently #happytopayyourbenefits trended on Twitter – people refusing to be divided, to judge or malign more vulnerable people. It made me so happy that people came out collectively in support of people who are having a rough time.

And, lastly, when people have finished with Tony Hogan, what is the next book they should be waiting for?

Next up is Thirst, a contemporary love story set between the heat of a Hackney summer and rural Siberia. It shares a similarity with Tony Hogan…in that it shines a light on the sort of characters that don’t normally get the feature in literary fiction. It’s out next July with our brilliant publisher Chatto & Windus and I couldn’t be more delighted about it.