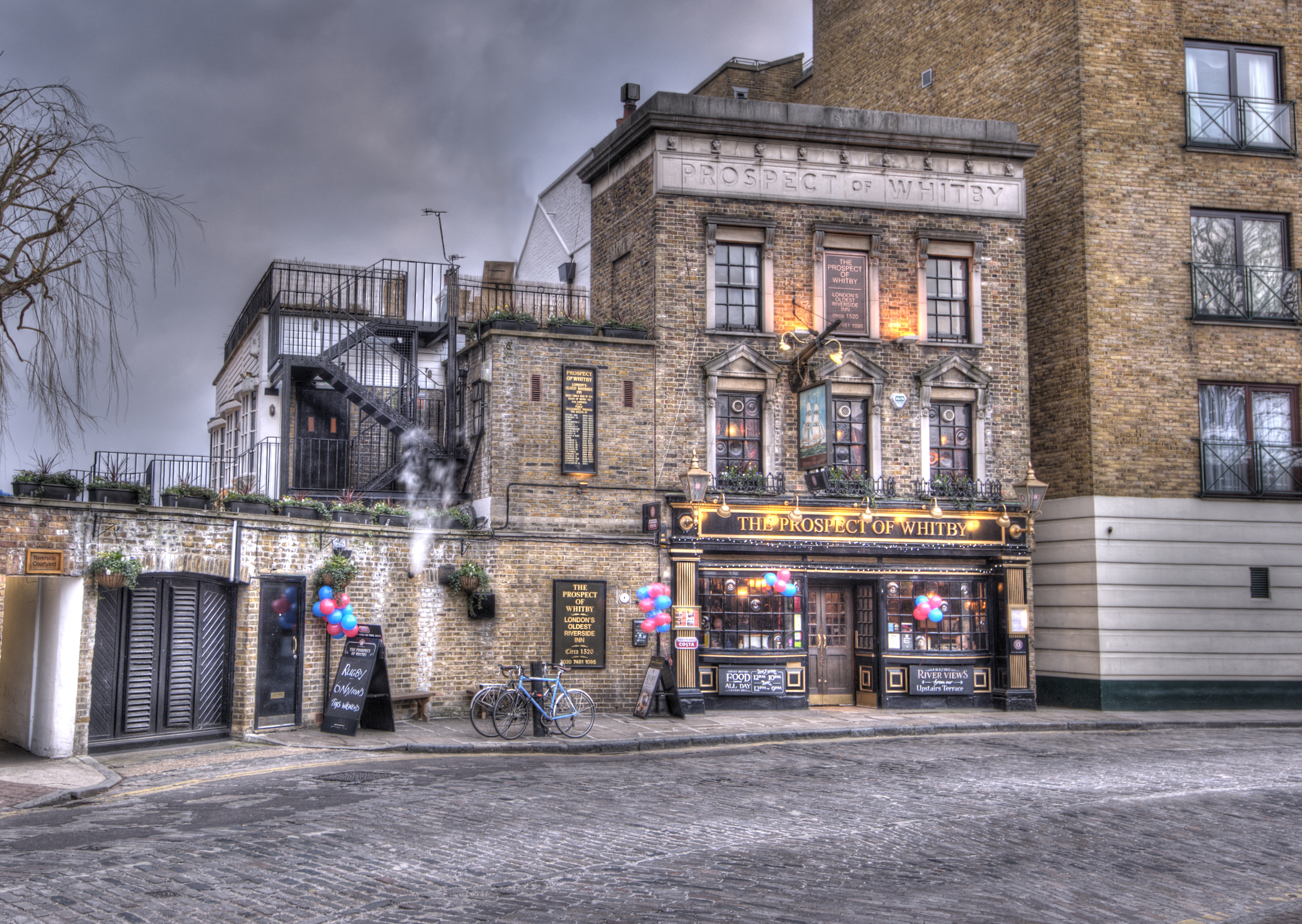 Subject: The Best Pub in London

Location: The Prospect of Whitby in Wapping

From his earliest published work in the late ‘20s Eric Blair had a powerful writing style – unfussy and precise, observant and vivid.

By the start of 1946 his prose had been sharpened like a butcher’s knife by years at the typewriter – producing fiction and journalism at a quickening pace. In Politics and the English Language he jotted down his six rules for writing, the hallmarks of an Orwellian style.

But there is another characteristic of his essay writing that is worth mentioning here. It is the way he structured his short journalistic pieces. Once he had settled on a subject, he took a stance and then enlivened his argument with between five and fifteen individual points. Indeed, this is what he was doing in Politics and the English Language, and it is also what he was at in his pieces about tea and junk shops in January 1946.

Another essay from this period, The Moon Under the Water, sees him playing the same trick – this time in connection with the perfect pub. The essay is, in fact, a deceit. There is no such place as the Moon Under the Water. The establishment is a mere invention of Orwell’s imagination, a place that boasts only distinguishing features – to Orwell’s mind at least.

The Moon Under the Water, writes Orwell:

The list is enlivened with observations and injected with colour but is still presented in the essay in a simplistic way. As I mentioned before, it is the exact same technique that he used when writing A Nice Cup of Tea­.

I put the Best Pub in London into my Orwell’s England project in February as Orwell didn’t bother to include any associations for February – which he dubbed ‘a particularly detestable month’. And as he wrote The Moon Under the Water for the Evening Standard in February 1946, I thought that it would be a good candidate to fill in the gap.

It may seem a simple task, but anyone who attempts to single out the best pub in London will find it is a controversial undertaking. I spent the first fortnight of February asking people to nominate their favourites and I added some of my own. The shortlist I ended up with was:

I could go on, but these were the forerunners. Unlike the cup of tea assignment I decided that I was not going to tally up how many points from Orwell’s list that I could find in a pub today, but instead find a place he might like among all the identikit establishments in London today.

I settled in the end on The Prospect of Whitby. Down on the eastern stretches of London, in the old docklands, The Prospect of Whitby backs on to the Thames and has a colourful history as the drinking den of Judge Jeffries – the infamous hanging judge. A noose – albeit a rather flimsy noose –hangs from the outside gallery and as such it has a mischief that I think adds to the atmosphere.

It has a good selection of ales, stouts and beers. The floor boards creak under your feet and slant at a sharp enough angle to make you think you’re drunk long before you are. The Pepys Room, to the back of the upper floor, has a vast window that allows you to gaze over the Thames as it widens out on its snaking path towards Greenwich. You can imagine when this was the biggest port in the world, a nest of crime and a hive of commerce.

I still wonder whether Orwell would have like it. There is no garden, just a steep shingle beach down at the back, and it is too well known to be considered a true local. It’s clientele are transient. The historical angle which so appeals to me didn’t crop up in his list of points about The Moon on the Water, it was enough that that pub had been built seventy years before (as it was  to him) in the Victorian age.

Nonetheless it’s my choice. I took the photograph on 24 February after a trip to see the Ansel Adams exhibition at Greenwich. I don’t doubt that Ansel Adams himself would have hated this photograph if he saw it. It’s a composite – three photo stitched together and processed with the Photomatix HDR software.

This type of digital manipulation is detested by purist photographers. But it’s all I could do to create an interesting image on a horribly overcast winter’s day. It shows the Prospect of Whitby at dusk on a Saturday evening. Balloons are up outside to signal a party of some sorts. You can peer down the alley to the right on the pub that takes you down to the waterfront and there’s an element of old vs. new with the modern office building next door.

If you’d like to read a little more about the history of the pub, you can do here.