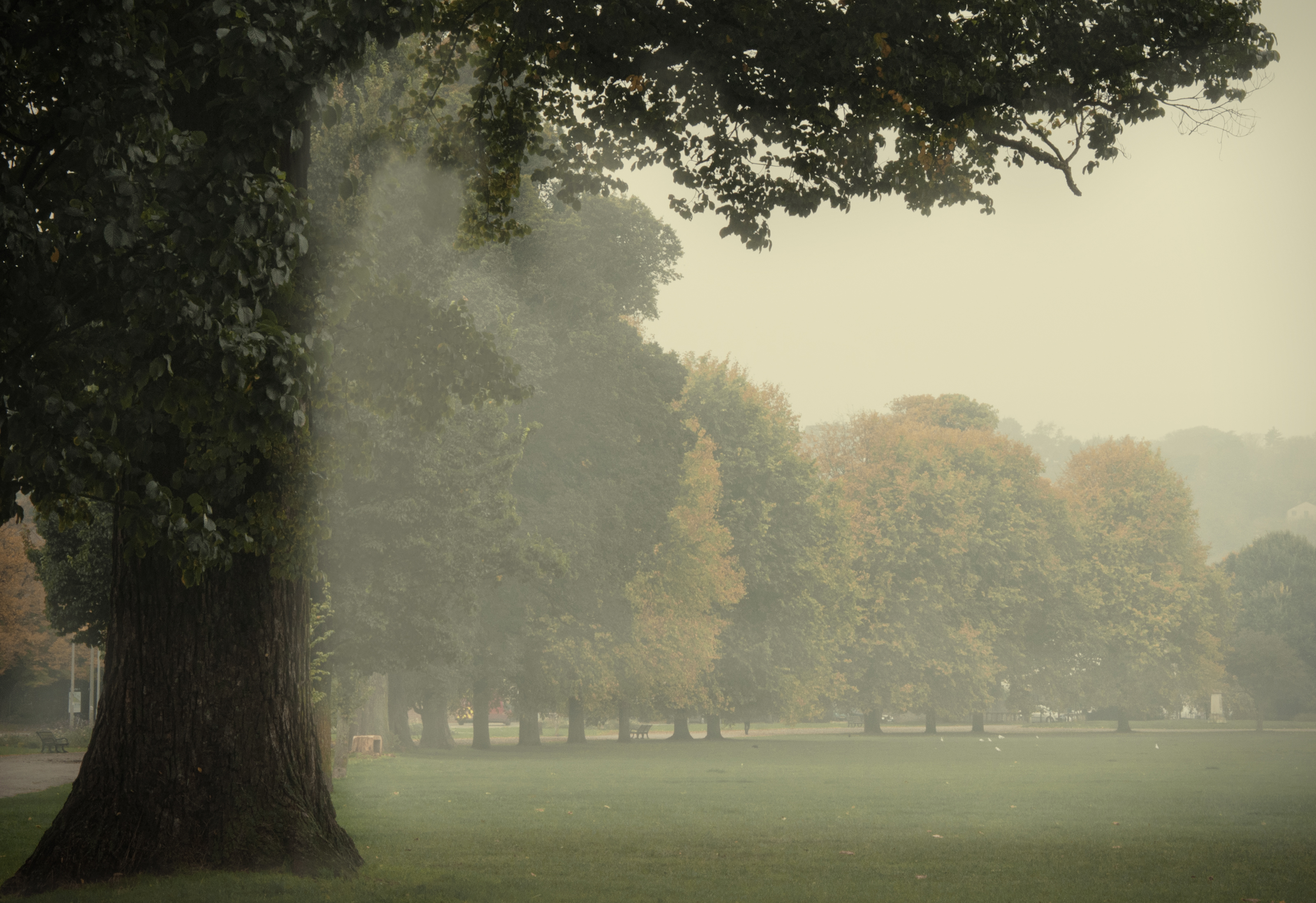 Subject: Yellow elms trees looming out of the mist with all of their leaves dead and none fallen

Let’s imagine for a moment that it’s October 1936. It’s not yet eight in the morning. The sun has only just crept above the horizon and a thermometer nailed to the wall of a thin and thatched cottage in Wallington in north Hertfordshire reads 47°f. Orwell glances at it and then turns his attentions to the chicken coup. After a short search he discovers two new eggs.

He wraps a scarf around his neck and sets off for a morning ramble. He turns left out of his gate and walks down a narrow lane that evens out in a minute or two into a low flat common. Not long before you could see, from this very spot where he stands, a mile or more to where a farm lies tucked into the side of a gentle hill. But this morning clouds loom dark and low and the farm is hidden. All that Orwell can see is a row of yellow elms looming out of the mist with all of their leaves dead and none yet fallen.

In 1936 this was a scene as typically English as any. There were as many elm trees as oaks in England. Constable had captured their striking slender outline in his landscapes and again and again they had featured in verse and prose as a lasting symbol of an ancient landscape, seen by Arthurs and Henrys and Edwards and Elizabeths.

That Orwell notes down the elm tree among his English associations is telling – he didn’t mention an oak, a sycamore or an ash – the elm is the only tree he mentions. But the seventy years that have passed since his Why Bad Climates Are Best article was published in the Evening Standard have been ones of unmatched catastrophe for the elm. In the late 1960s a virulent strain of Dutch Elm Disease arrived and quickly caught a hold. The disease was carried from one tree to another on the backs of the elm bark beetle and it cascaded through the country. In the years since 25 million elm trees are estimated to have died and the English countryside’s traditional vistas have changed for ever.

Clearly this presented me with a problem for the next in my Orwell’s England series of photographs, which, very clearly, was an elm looming out of the mist. At the beginning of the month I knew little about the elm tree’s plight and was more concerned about finding a suitable, isolated elm on a misty morning – the weather being my chief concern. But then, on consecutive days, I was told that I’d be lucky to find a mature elm at all, most of those that survive are juveniles that grow in hedgerows and are attacked when they reach 25 feet – which Will Cohu pointed out to me is the cruising height of the killer beetle.

Last Monday I was doing a reading at Droitwich and I thought I’d drive home through the Cotswolds – an old bastion of the elm – to see if I could find any there. Specifically I’d found a snippet about an old elm that overhung the stocks at Stowe-on-the-Wold, and given that this last week has been full of grim stratus clouds (fog) I thought I might have a chance of getting what I was after there. This idea fell flat. Speaking to a lady outside a farm shop opposite the stocks, I found out that an elm had stood on the spot but had succumbed in the 1970s to disease and had been felled.

She directed me to a spot on the outskirts of the town, where a tunnel of elms had once overhung a road. Here once again I had no luck but did meet one of those unhurried and extraordinarily sensible people that you only find in the countryside. He was called Phil and took some time to show me the young elms that they had in the hedgerows, as well as several dead or dying trees that had visited by the beetle.

We talked for some time about how the landscape must have changed enormously since the loss of these trees and he suggested that it might be an idea to erect sticky pheromone boards around the elms to divert the beetles. His point was that there are very few sexually mature elms and an equally small number of beetles, so as soon as one elm reaches maturity and releases its pheromone, they find it almost instantly and attack it. Sticky and dull coloured pheromone boards would only really be of interest to the elm bark beetle and might be successful diversion, he thought. It’s an idea that has never been explored as far as I can tell.

I left Phil, very grateful for having met him, and resolved to do the one sure thing that would bring me to an old English elm – and that was visit Brighton. Brighton is very much the elm’s last stand. For years the beetles have not been able to negotiate the Downs that act as a physical barrier to the spread of the disease and thousands of mature elms survive in this stubborn pocket of resistance. So last Wednesday morning I took a train down and got my photograph in the early morning mist, the low lying thick fog that we’ve had all last week coming in useful at long last.

I’d recommend a trip to Preston Park in Brighton for anyone who’s interested in the English elm and its fight against what seems an increasingly sealed fate. Two beautiful trees in particular – known fondly as the Preston Twins – remain in one corner of the park and are estimated to be around 400 years old.

But sadly it seems that here too an axe hovers in the air. In 2010 Newsnight reported that Dutch Elm Disease had finally reached Brighton and that several mature trees had been felled. Others followed and now six stumps can been found in Preston Park. When I was there I saw timber being carted off and I later read in the Brighton Argus that the outbreak had grown so serious that the Preston Twins were being inspected daily for any sign on disease.

All this in the same week that we learn a deadly fungus threatens to do to the ash trees what Dutch Disease did to the elms. Before starting this project I was unaware just how much the landscape had changed over the past forty years, and reading the news about this Chalara fraxinea fungus you can’t help getting the unsettling feeling that history is poised to repeat itself.