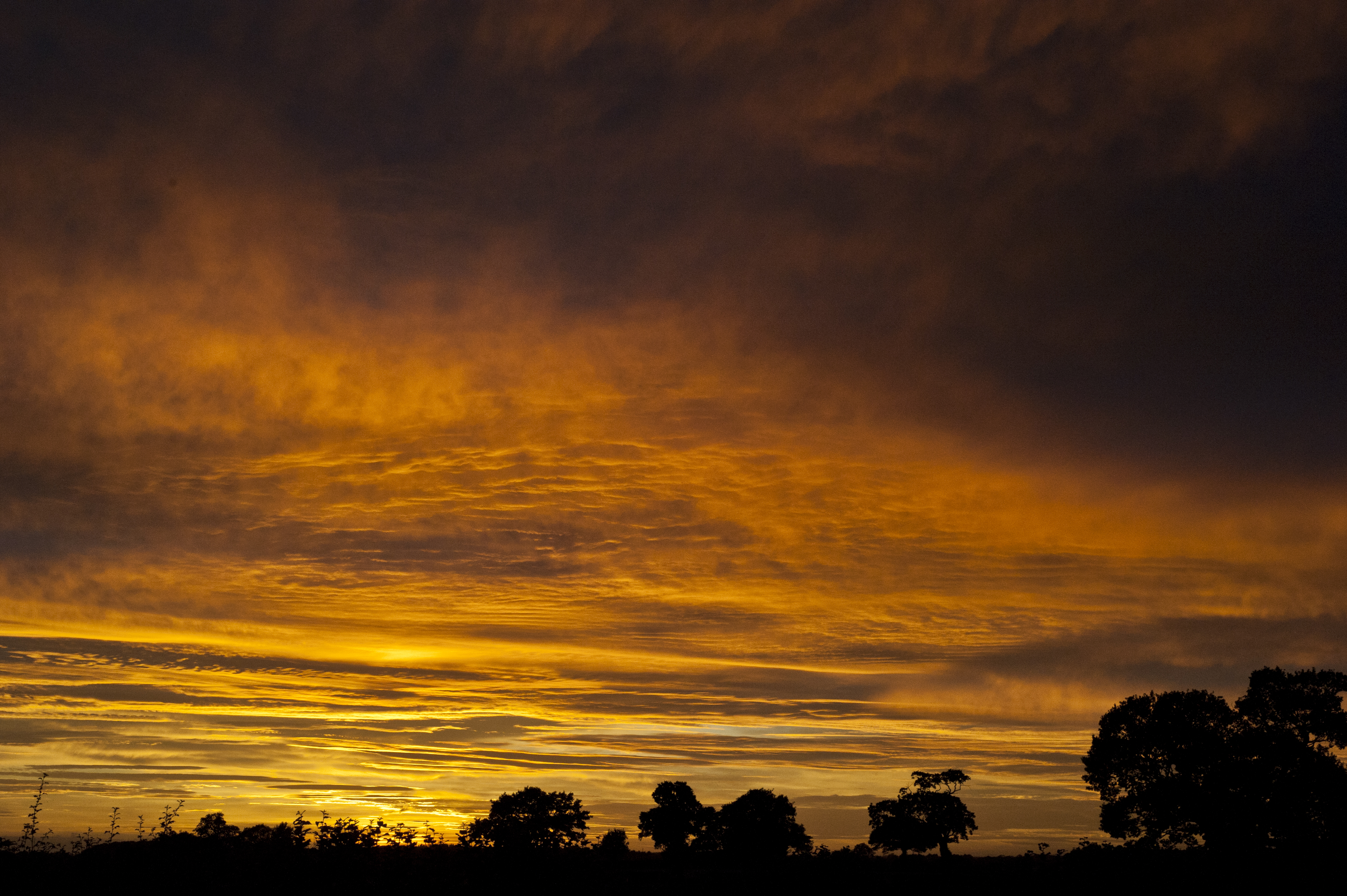 The blackberries are out again, a year’s spun by and I’ve finished my Orwell’s England project. In the same way that I rounded up July’s efforts, I’m going to whizz through my August photographs here. 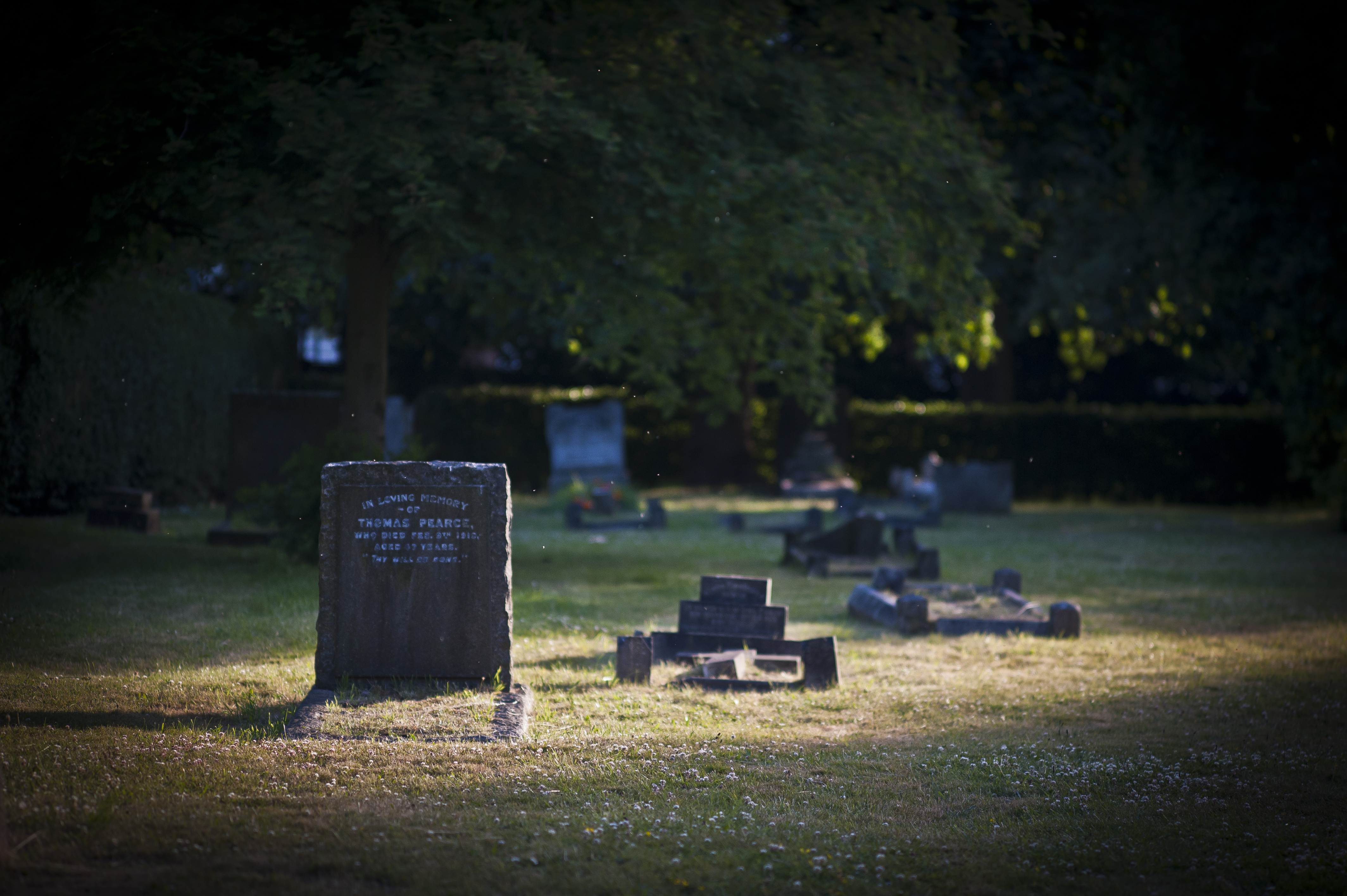 One of the four rules that I set myself a year ago was that ‘I could only use a location once’ – but this proved too difficult. Magravine Cemetery is just over the road from my home and it’s become a daily photographic visit. The headstones, the wild flowers, the ash trees that shade the mazy paths, it is a wonderful place to play with light – and it is here that I found my midges in late August.

As I’ve mentioned this photograph should be disqualified as I’ve used the cemetery before, but just as I have set the rules I’m letting myself break them. It’s just a simple shot of a grave stone (belonging to a Mr Thomas Pearce by the way) at the end of the day, a weak flicker of sunshine lighting up midges that are circling in the air.

I’ve limited this project to England but Orwell’s experience of midges was more than likely rooted in his spell on Jura, the island on the west coast of Scotland. Midges are so infamously bad on the west coast that a Midge Forecast website exists.

It’s Jura that I imagine that he was thinking of when he was writing Bad Climates Are Best. Orwell first visited Jura in 1945 and was there during the summer month, so it’s fair to imagine that midges were freshly in his mind. 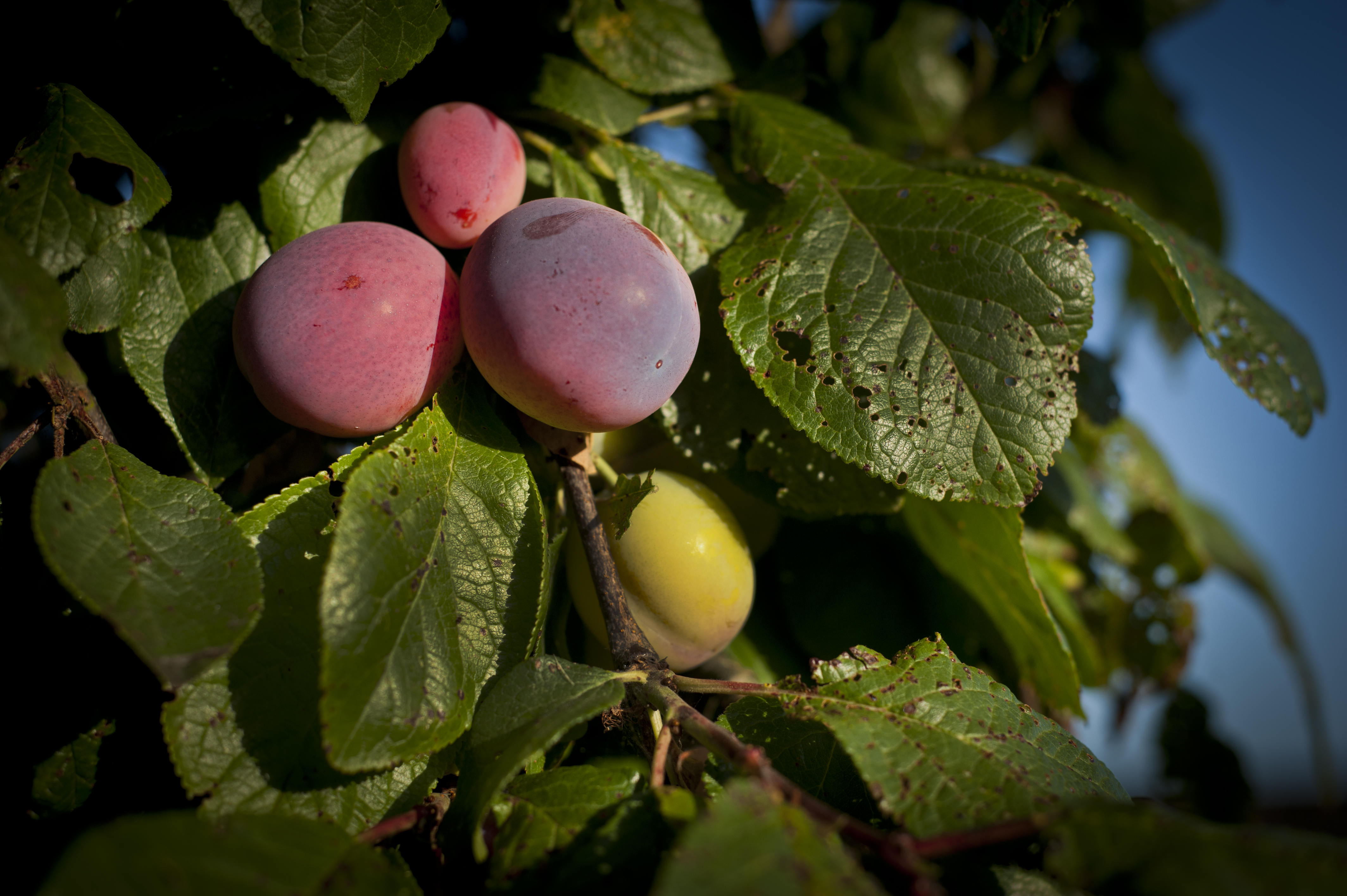 I took this photograph back home in Staffordshire last week in the little orchard of an old friend. The plums are late this year, due to the cold spring and it’ll probably be another week before the plums, apples and damsons are ripe.

This shot was taken in the early morning light and I’ve added a black vignette to the frame to concentrate attention on the fruit in the middle and not the tangle of branches and leaves that surround them.

It was a similar challenge to my very first Orwellian photographic challenge – the blackberries – back in September last year. The waxy texture of the fruit’s surface can be a tricky one to render sharply and you’ve got to pick a good aperture to keep the fruit in focus and to diffuse the background. 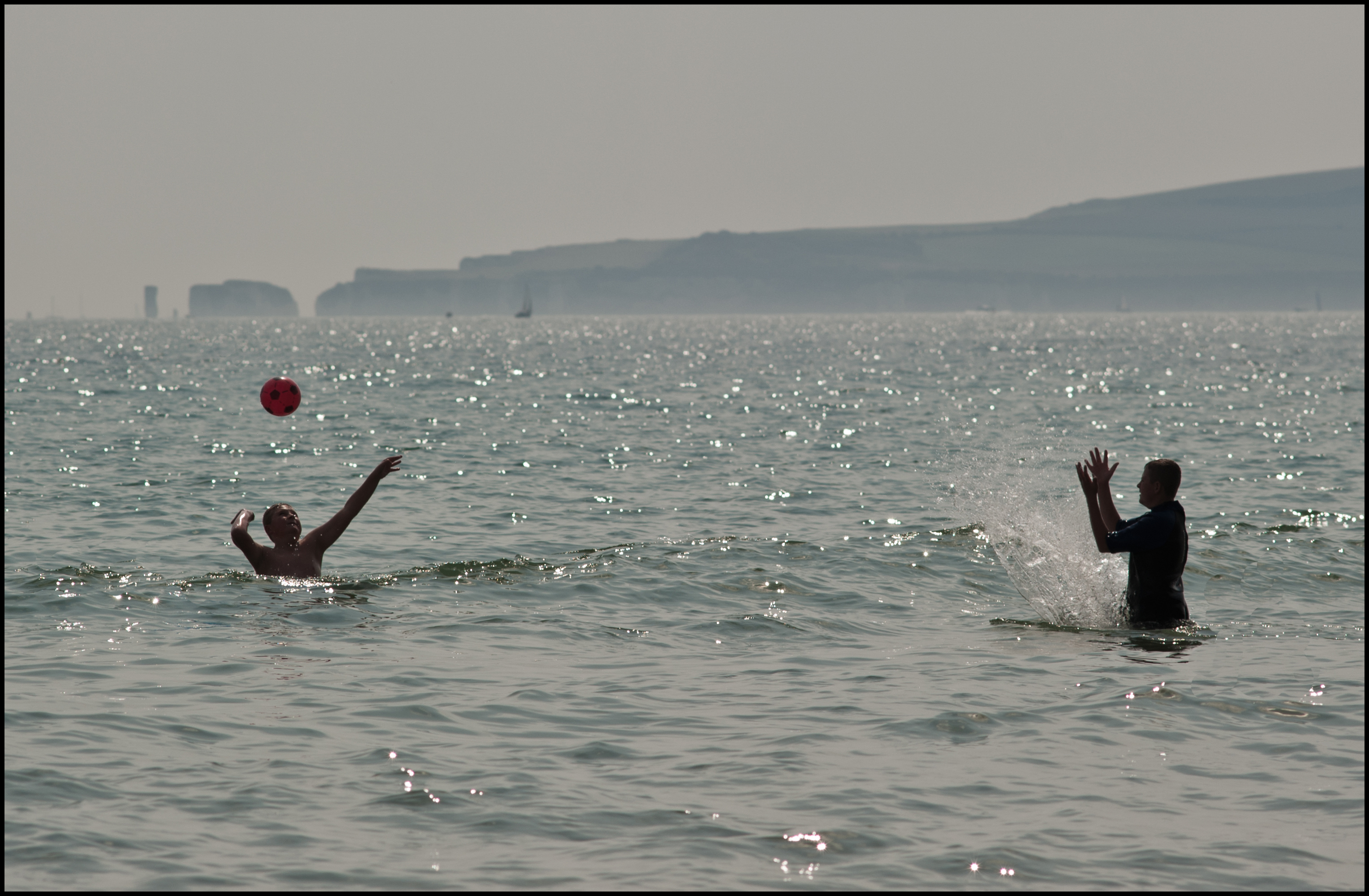 If you have a look at this BBC article you’ll see a couple of shot of Eric Blair in the 1930s down on the beach at Walberswick beach at Southwold in Suffolk. There’s not much evidence that there’s any sea bathing going on as Orwell’s dressed from head to toe in a sort of baggy shirt and trousers combo.

A more watery tale involving Orwell (it seems better to refer to him as Orwell rather than Eric by this point) comes from his time in Jura. In August 1947 he had taken a break from writing the novel that would eventually be published as Nineteen Eighty-Four and had embarked on a sailing trip with his adopted son, Richard, nephew and niece.

The trip went awry. Orwell’s misjudged the tidal waters in the Gulf of Corryvreckan that separates Jura from the smaller island of Scarba to the north. Their little sailing boat was caught in a notorious local whirlpool and, in Richard Blair’s vivid account:

The little outboard motor became swamped and died and, unable to re-start it, Henry took to the oars and managed to row us to one of two rocky islets, where he jumped out onto the rocks and taking the mooring line, tried to secure the dinghy. At this point the swell receded and our dinghy rolled back and overturned, throwing father, Lucy and me into the sea beneath the boat. Fortunately I had been sitting on my father’s knee and he was able to pull us both out from under the dinghy. Lucy did the same and we all scrambled onto the rocky islet. Everything in the boat was lost.

Sea bathing indeed, although it is probably not quite what Orwell had intended when his had written it down as one of his August associations a year and half earlier.

To get the photograph I went down to the calmer waters of Bournemouth, walked along the beach and got this shot with the twinkling sunshine on the waves and the Old Harry Rocks in the distance.

Beds of geraniums painful to look at

If I’ve got any association to do with a geranium, it is connected with their unmistakable smell. The faintly musty, sweetly perfumed scent that, to be honest, I don’t much like. But for Orwell, it seems that the image of geraniums were bound up with the vibrancy of their August colours. I don’t think he liked them too much either.

Red geraniums seemed just the thing for this shot and I set them up on the green grass in the hope of creating a scene that was visually uncomfortable (red and green should never be seen). And this is the result. 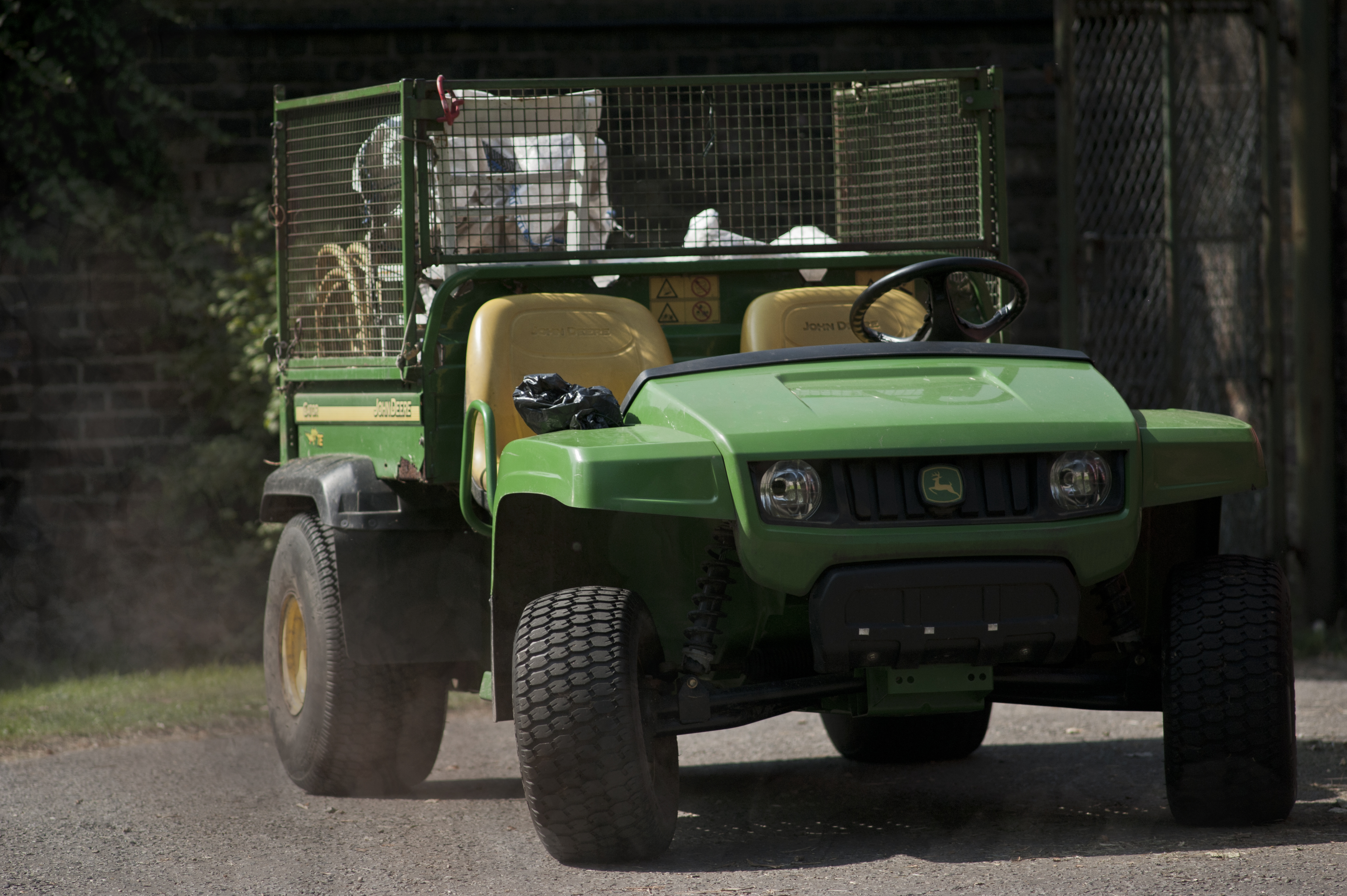 The dusty smell of water carts

This last of Orwell’s associations was probably the most difficult. Water carts are almost obsolete nowadays with the prevalence of tarmac roads right across the country, replacing the old dusty city street or country lane.

When Orwell was writing in the 1940s the reality was quite different. In the August heat water carts were required to calm the atmosphere, with the dirt roads throwing up clouds of dust. The smell he mentions, of water and dust combined, is one that has almost completely vanished nowadays and to imagine it you’d have to think of the watering of a bone hard cricket pitch or farmer’s yard.

Producing a 2013 era photograph then proved a real challenge. In the end I decided to take a photo of this John Deere garden tractor – once again from Magravine Cemetery in Hammersmith – that the council use to water the flowers and shrubs. It’s standing on a dusty road and it was about the best that I could manage.

So that’s an end to the project. I have taken photographs in London, Preston, Portland, Watford, St Albans, Bournemouth and Brighton– a fair spread of the country. I’ve tried to link 1946 with 2012/13 and probe Orwell’s recollections as much as I can. I’ve tried to write about photography a little too.

I suppose my main thought is this. Orwell is all too often entrapped in the adjective ‘Orwellian.’ Of course he was the political animal, campaigning against the abuse of power the attacks on personal freedom. But there was also a very human side to him.

He lived this happiest years in the countryside. He treasured far above material wealth the sight of a toad emerging from its winter hibernation. He knew his birds, his flowers, his animals. He had often watched hares having boxing matches in March. He looked for, and found, the small quirks of nature – and finding them myself this year has made this photographic project very worthwhile indeed.